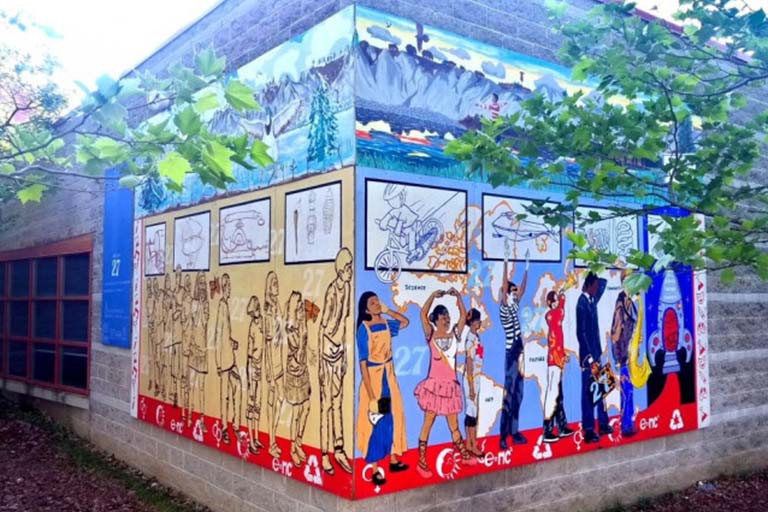 Art and activism intersected when Project Urban Canvas launched a mural series celebrating the Universal Declaration of Human Rights.  This is a 30 minute tour of the 2008 community mural which prioritized youth mentorship and artistic skill-building in Scarborough.

Shafia Shaikh is the founder of The E.W.o.C. Project (Equity for Women of Colour), an initiative committed to expanding representation and creating opportunities for women of colour through community public art projects, youth workshops and street art. E.W.o.C places a focus on activism for under-represented communities, often involving community engagement and sharing authentic stories through accessible art. 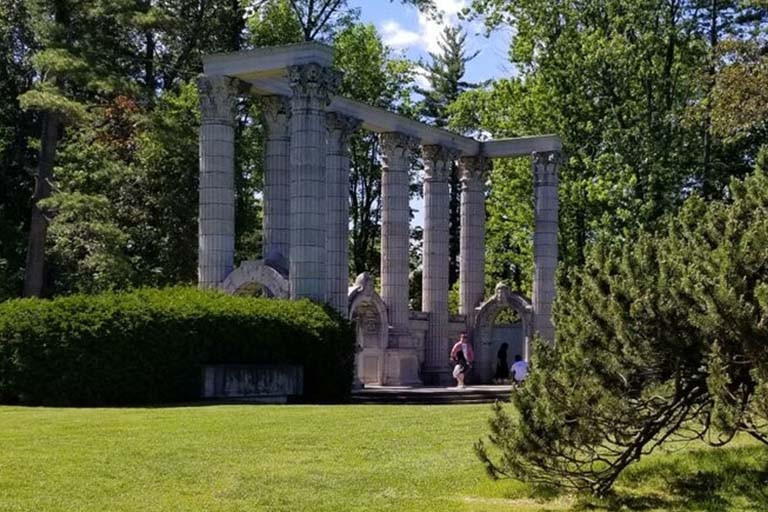 A park like no other, Guild Park and Gardens is a special place where art, architecture and nature meet on the spectacular Scarborough Bluffs. Dotted by a unique collection sculptures and architectural fragments salvaged from 19th and 20th century Toronto buildings, these beautiful grounds have provided a home and a forum for artists and artisans, where their work was created and collected for the enjoyment of many.  Join the Toronto Society of Architects as we explore these picturesque grounds and learn the stories behind its artefacts, landscapes and buildings. 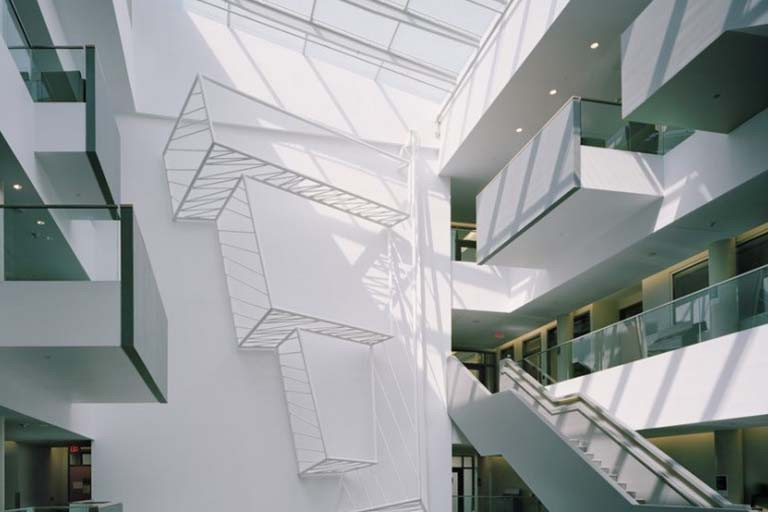 From Louis Archambault’s organic and enigmatic A Tall Couple, commissioned for Expo ‘67 and presented to the campus around the time of its founding, to cutting edge contemporary projects by Young & Giroux, BGL, and Kim Adams, the University of Toronto at Scarborough is site to a number of works of public art.

We invite you to explore the campus with writers and UofT students Hannah Macdonald and Sofia Suleman as they examine and provide contemporary perspectives to the public art on campus, exploring its sites, histories, memories, and possibilities. 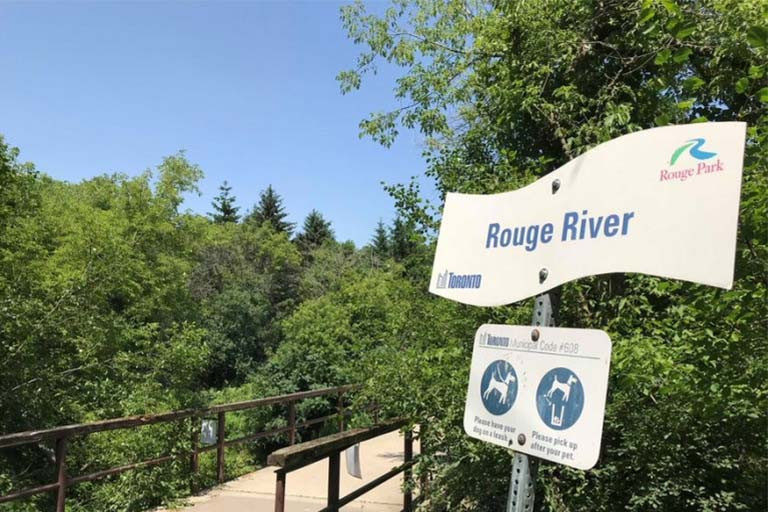 A guided walking tour in Rouge Park with artistic presentations and storytelling about Bead Hill, the only known remaining and intact 17th century Seneca Village (named Gandatsekiagon) and the history of Indigenous presence in the Scarborough Rouge Valley.

Be on the look out for this tour, coming soon to Driftscape! 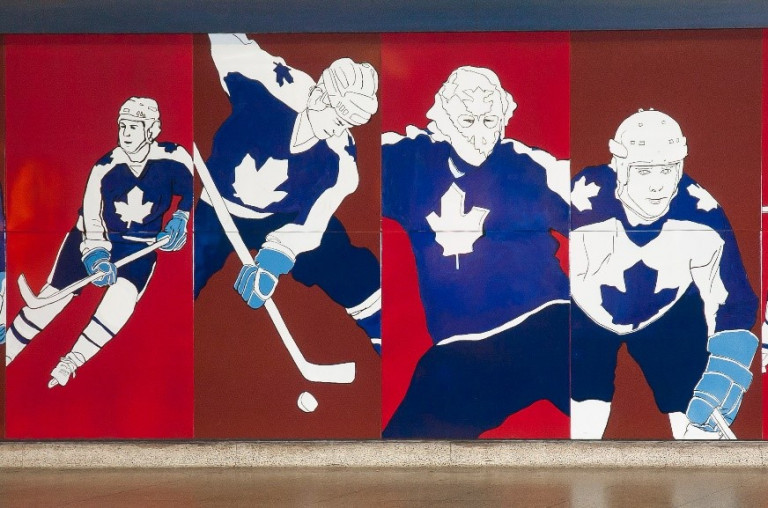 All Around Town in partnership with the Toronto Transit Commission

In 1954, the TTC opened Canada's first underground rail line, then known as the "Yonge” subway, under Yonge Street between Union Station and Eglinton Avenue. It was extended multiple times between 1963 and 2017 heading northbound from Union to St. George and Finch.

Participants will travel on the subway to visit pieces of art at or in the vicinity of 8 different stations.

One such piece, unveiled in 1985, is at College station by Artist Charles Pachter’s is titled “Hockey Knights in Canada”. This is a two-part installation depicting the Maple Leafs squaring off from opposite sides of the subway tracks, with the Montreal Canadiens. 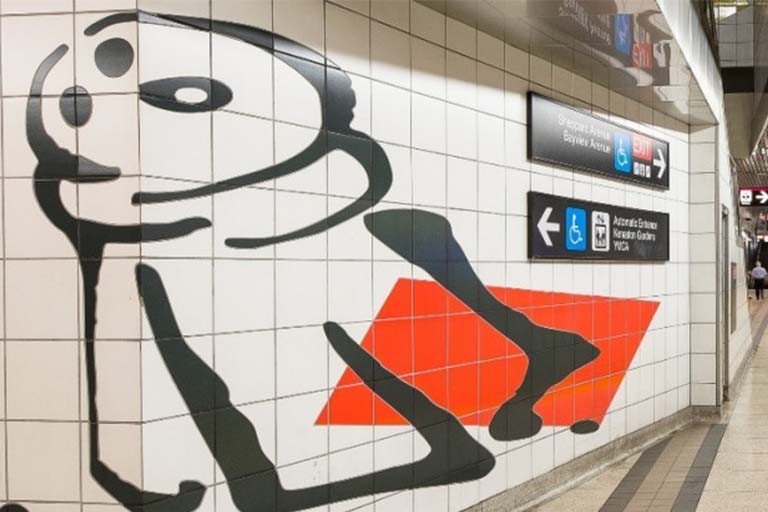 Line 4 opened on November 22, 2002, and has five stations and is built entirely underground in the district of North York, along Sheppard Avenue between Yonge Street and Don Mills Road.

Participants will travel on the subway to visit 9 pieces of art at or in the vicinity of 8 different stations.

Featuring “From Here Right Now” by artist Panya Clark Espinal. The trompe d\oeil artwork depicts shadows of common objects (i.e., apples and ladders) that are transferred to the floors and walls and framed by patches of coloured tile giving it a surreal look. Usually the images are seen distorted, but if you stand in the right locations, they become clear and focused. 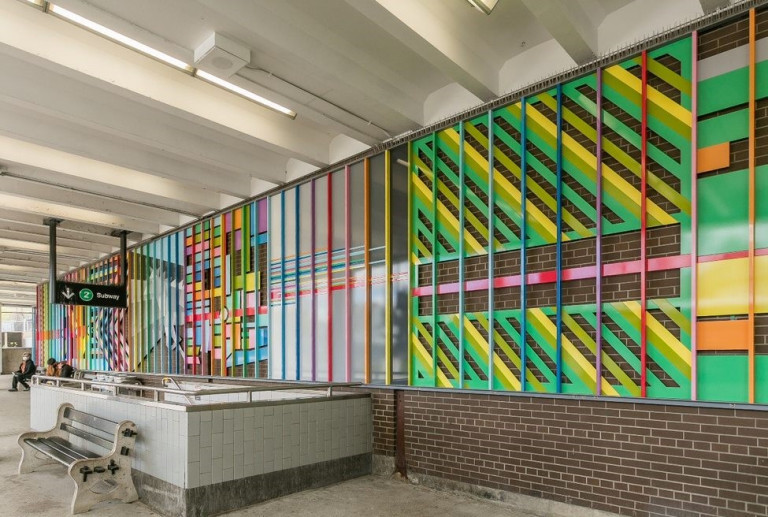 Travel time for many transit riders was cut in half with the opening of the new Bloor-Danforth subway on February 26, 1966 from Keele station to Woodbine station.

Participants will travel on the subway to visit pieces of art at or in the vicinity of 6 different stations.

One such piece of artwork at Woodbine station, “Directions Intersections Connections” by Marmin & Borins are brightly-coloured coated metal panels. Seen up close the artwork is arranged in geometric patterns. From a distance the geometric patterns express the dynamic motion, community and the connections to the present and the past.