The King and Queen show has traditionally kicked off the Toronto Caribbean Carnival every year. The event is a spectacular display of creativity and pageantry featuring over fifty elaborate, enormous costumes centred on different themes. The leaders of Toronto Carnival Mas Bands perform in front of judges and an enthusiastic crowd. Male and female competitors are judged on the details of their costumes and how that costume represents the respective themes of the Mas Bands. At the end of the night, the King and Queen are crowned.

We would like to acknowledge funding support from the Ontario Arts Council, an agency of the Government of Ontario. Special thank you to the Design Fabrication Zone (DFZ) at Toronto Metropolitan University (TMU) for support with fabrication, design and research.

As described in the best-selling novel Roots by Alex Haley, the character Omoro holds his infant son Kunta up to a starry sky and announces: "Kunta Kinte, behold the only thing greater than yourself!"

Kunta Kinte kept his connection to his ROOTS by continuing the family ritual of presenting his newborn baby to ALLAH... no matter where you are in the world, we all look up at the same sky

• Large mask of Omoro holding up the Adinkra symbol for FREEDOM

• Stars and constellations in the background

Our QUEEN; STRANGE FRUIT is a tormented figure trying to grapple with the atrocities that have been bestowed upon her people.

• Shades of rose gold (to give the feeling of a bronzed structure, stuck in time)

• Large Tree that is fashioned to resemble ropes that have been cut at both ends. The roots and the branches 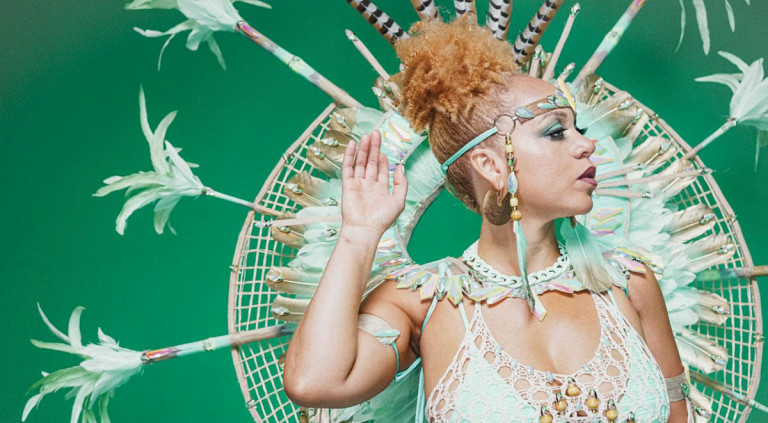 This exhibition was located at Yorkdale Shopping Centre, 3401 Dufferin St, Toronto, ON

Carnival Portal exhibits a series of alternate stories as you travel through time and space. From its oppressive origins to its infectious expression of love and unity, vistors will experience a sensation that is, quite frankly, otherworldly.